Baby Eli weighs about the same as 4 oranges. I had my 30 week visit on Monday and I apparently gained 6 pounds in two weeks. I haven’t been eating any differently and was concerned because I have officially reached my 25 lb. weight gain goal. My OB says its probably from water retention due to the heat and eating foods high in sodium. I’ve been trying not to eat out as often and have been eating Healthy Choice forzen lunches, which are apparently very high in sodium. Hopefully, I can watch my sodium intake a little more closely and drop some of this water weight before my next visit. I assumed I would gain more than 25 lbs., but maybe I won’t go too far over.
We’ve been crazy busy trying to get house projects finished and I have been swamped at work, trying to get several big projects wrapped up prior to maternity leave.

Weight: 135 lbs (Darn you, Healthy Choice!)
Waist Line: 39″
Signs & Symptoms: Back ache, some mild swelling and Braxton Hicks contractions. I downloaded a super cool app to help me keep track of them, so I’ll know if I’m having too many of those “practice contractions”. (My real contractions felt exactly like my BH contractions with Alston.)
Looking Forward To: Wrapping up several big projects and having some down time!

Weight: 130 lbs.?
Waist Line: approximately 37″ I’ve been getting lots of “wow, you look really pregnant today” comments. I don’t know if my bell has actually grown or what, but I’ve been feeling “really pregnant” as well.
Signs & Symptoms: Besides all the other symptoms, I haven’t been sleeping and I pretty much stay in a fog most of the time. Hopefully it will go as quickly as it came.
Looking Forward To: finishing house projects.

This week, Eli should be about 17 inches long and weight about 3 pounds, or roughly about the same as a cabbage. His chances of survival outside of the womb are pretty good, but he would need intensive care. (Hopefully, he’ll stay put for at least 6 more weeks.) We made some pretty good progress in the nursery this weekend and the kitchen renovation is in full swing. I washed teeny baby clothes and receiving blankets, unpacked the swing and car seat and the nursery is filled with baby gear. Our house looks like a tornado hit it. I can only imagine it won’t look much different once I have three boys running around instead of just two.
I’ve been super busy at work, finishing up projects and preparing for maternity leave. It has caused me to become super organized, but my lack of brain power requires me to make several list and cross check to make sure I get everything accomplished. Thankfully, I seem to have everything on track so far.

Weight: 129 lbs. When I went for my visit last Friday, I had only gained 1 pound. Yippee! I hope I’m not jinxing myself. Who am I kidding? I’m sure I’ll make up for it before my next visit.
Waist Line: approximately 37″
Signs & Symptoms: Low Iron, backaches and sciatica (a pain in my rump, literally).
Looking Forward To: having the nursery painted!
Other News: We finally decided on a name! Mason Eli Scott.
I’m pretty excited to have that checked of my list.

Here is the nursery with the backs of the bookcase painted. Paw Paw color matched Valspar’s Sea Spray to Benjamin Moore paint. Isn’t it lovely? The bookcase will be Benjamin Moore’s Snowfall White. For the walls we’re using Benjamin Moore’s Natura (no VOC) paint in Dove Wing. Hopefully I’ll have new pictures soon. We’re in the process of painting the bookcase and Patrick picked up the rest of the paint today.

What happened to weeks 26 & 27? I was on vacation. And I’m pregnant and forgetful. Forgive me. Not too much has changed though (besides the fact that baby is growing like a weed, er… vegetable?), so I guess that’s a good thing. I have my next appointment on Friday (I think) and after that I will be going every two weeks. I can not believe I’ve already reached my third trimester and its giving me a little bit of anxiety. Like usual, I have just about everything organized and on track at work, but at home I feel like there are one point five million things to do and the clock is ticking. On my “home” to do list: #1 the nursery, #2 name the baby, just to name a few. I feel like Patrick and I are getting closer to naming him. We discussed a couple of names that we’re partial to tonight while watching Hell’s Kitchen. Hopefully we’ll have a name picked soon and I can mark that one off the list. Maybe that’s why I’ve been procrastinating on everything else. I have a tendency to want to things “in order” no matter how logical it seems.
Weight: 130? It fluctuates every time I step on the scale, so its kind of hard to say. We’ll see what the scales say at my visit later this week.
Waist Line: approximately 37″
Signs & Symptoms: Low Iron. (My doctor put me on a prescription Iron supplement with Folic Acid after getting the results from my bloods test last visit. It has made a world of difference.) Backaches and Sciatica. (Baby is getting just big enough to put pressure on my sciatic nerve which can cause shooting pains in my hips and rear. I had the same issue with Alston, but it was much worse last time.)
Looking Forward To: finishing some projects in the nursery. I’ve made some pretty good progress and the hubs promises we’ll get some serious work done this weekend.
Note the time. I guess I should add sleeplessnes to my symptoms, but this hasn’t been, and hopefully won’t become, a regular occurrence.

I’ve reached my third trimester. Already? And panic is starting to set in. Mainly becuase this is what the nursery looks like:

For quite some time, I’ve been pinning ideas for the nursery. Since we found out Baby S was a little boy, I’ve been ready to start working in there, but haven’t quite found the motivation I was looking for. I guess the ticking time bomb around my waist is motivation enough. Baby S will be here before we know it and I still have lots of other projects outside of the nursery that also need to be completed before his arrival.

Here is the room before we cleaned it out. Wasn’t she a beauty? (Um, no.) We moved the computer into the kitchen and Alston was using this room as a library of sorts to play with his books and puzzles. 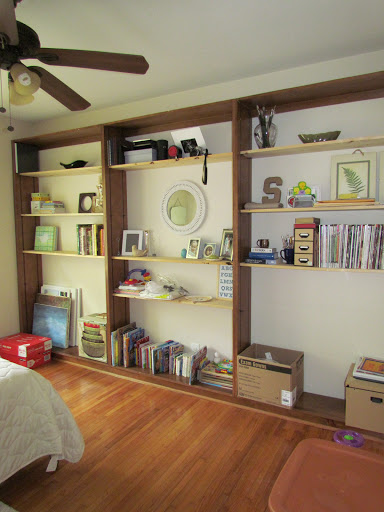 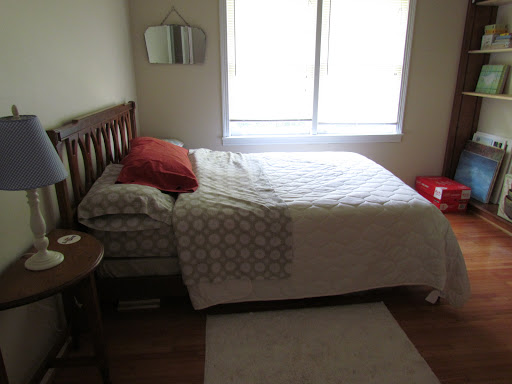 I already have really nice Pottery Barn bedding from Alston’s Beatrix Potter nursery way back when. (See Alston’s nursery here.) Although, I’ve pretty much decided not to use it again. I know I want to use this antique dresser that my mom is letting me borrow. I think its the perfect size to put a changing pad on top and I love the clean lines and rustic feel. It will also provide some much needed storage space in a room with a tiny closet. She also has a baby bed in a similar wood finish that I may or may not paint. 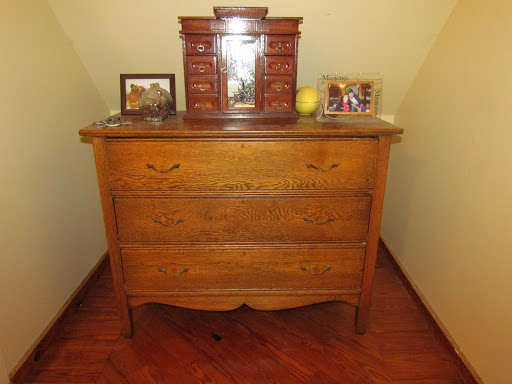 As of right now, I’m donning my painting gear (my pajamas) and I’m about to tackle that bookcase. I would like to make some kind of progress in there today. Patrick has been working quite a bit and is working today, so I’m going to be managing this little painting project alone. I may see if I can enlist the help of Paw Paw to come sand the bookcases for me.

My doctor’s visit went very well today. I had to do the routine glucose test, which wasn’t wonderful, but I survived. They should call me with the results within a few days. My next visit is in 3 or 4 weeks and then I’ll start going every two weeks. Is it really time for that already? This pregnancy is flying by! We better get to work around here so all of our little house projects will be completed by the time Baby Scott gets here. (I went into labor with Alston the very day we completed the living room addition to our old house. As soon as everything was moved and cleaned up, my water broke.)
Oh, and we should probably be trying to figure out what we’re going to call him.
Weight: 128
At my appointment today, my OB said my weight was excellent. Really? Yes. Usually its about a pound per week. If that’s the case, then I’m 7 lbs under instead of over, like I thought. That makes me feel so much better! Waist Line: approximately 37″
Signs & Symptoms: Backaches. I stay on the heating pad pretty much 24/7. Other than that, I’m pretty good!
Looking Forward To: vacation and house projects! We’re taking a break for some much needed R&R and then we’re back to checking things off our shrinking to-do list.

I want to use this Bible verse in my nursery, so I whipped up this little print. Its a 5×7, but when printed it has a 1 inch border all the way around, so it could fit into a 4×6 if needed. (Ilike the matted look without actually having a matte.) I went ahead and made a girly version to share with you guys. To download the full resolution 5×7 version, you can go here: boy or girl. Happy first day of Summer!

This week, Baby Scott (still nameless) is about the size of an ear of corn. His face is almost fully developed, so he should look pretty much like he’ll look on his birthday. BabyCenter.com/WebMD.com says hid daddy may even be able to hear his heartbeat if he puts his ear to my tummy. He’s a little bundle of energy and wiggles all over the place most of the time. I’m still feeling pretty good and have kicked into high gear “nesting”, so we’re getting alot accomplished around the house these days. Tahnkfully, Patrick seems to be nesting, too.

Weight: 125? I seriously keep forgetting to get on the scales. Oops. I have an apoointment on the 29th, so we’ll see what the doc says then. I don’t think I’ve gotten noticiable bigger and I’ve been watching what I eat. My clothes that I wore this time last pregnancy seem to be much bigger than I remember, so hopefully I’m not going to get a big as I did with Alston.
Waist Line: approximately 36″
Signs & Symptoms: Besides the usual, I’m pretty symptom free these days.
Looking Forward To: vacation! We’re leaving on the 2nd for a much needed vacay before baby arrives.

Signs & Symptoms: Tired and backaches (the usual) and having some trouble sleeping.
Looking Forward To: deciding on a name (still) and getting started on the nursery… we’ve already started cleaning the room out!

Technically, these pictures were taken at 21 weeks, but I just happened to get them scanned this week. They’re a little late. Oops!
Weight: 124 lbs? I haven’t weighed this week. I have been eating much healthier though!
Waist Line: approximately 36″

Looking Forward To: deciding on a name! (This could be a long process. Patrick keeps shooting down all my ideas.)

Stories of the Scotts
Blog at WordPress.com.
Loading Comments...