I completely abandoned any house-related projects for a while. I was exhausted and lost interest. Lately, I’ve been feeling much better. I’ve completed a few small projects and am now ready to take on a few larger ones. There are so many things that I would like to get completed before th earrival of baby #2. The guest bedroom/home office has all but been deserted. After working in Alston’s room and moving all of his books into the 3rd bedroom, I haven’t done much of anything else in there. We keep the door shut most of the time, but I would like to actually be able to use the space as is, until we get ready to start transforming into a nursery. I have hopes of making it a kid friendly area, with Alston’s books and puzzles that also has a sleeping area for guests (in case we ever have any). later, when we find out the baby’s gender, we’ll paint and remove the full sized bed to make room for a crib and dresser.

First on my to-do list is to find a new home for the computer. I hardly ever use it because I hate going into that room. Its messy and disorganized and has basically become a dumping ground since I cast off my efforts to finish it as a guest room. (It seemed pointless at the time since it will become a nursery sometime over the next 6 months.) I had three different areas in mind: The Kitchen, The Living Room, or The Man Cave.

It was Patrick’s idea to move the computer into the mancave, which I thought was very generous of him. And since it was the only spot with easy access to a phone plug, I decided it made the most sense. My mom and I discussed some ways to rearrange the furniture so that Patrick wouldn’t have to move any of his stuff out to the garage. Last night, I peeked my head in at my computer and decided now was as good a time as any to go ahead and move the computer.

After some serious rearranging, I realized the mancave wasn’t such a good spot for the computer. Patrick was not happy with the amount of space that was lost and I was not happy with the thought of having game trophies hanging over my desk. I also discovered how terribly disgusting that room was. I didn’t move the furniture back so that I would be able to give the room a good scrub first. The walls are also in dire need of a second coat of paint, so I may try to talk Patrick into painting them before moving the furniture back. 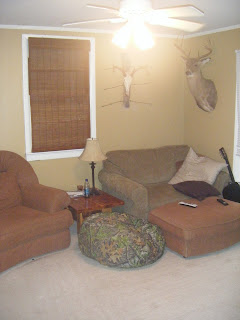 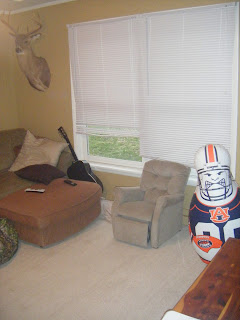 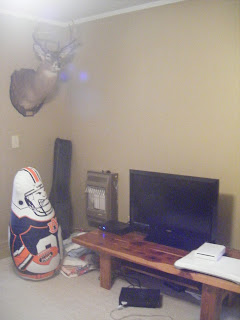 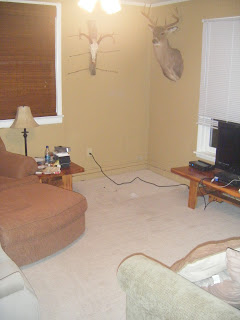 The clean bare spot in the corner is where my desk would go… right underneath the deer.

With the furniture arranged like this, the room feels very cramped and small. I think we’re going to go with Option 1: The Kitchen. 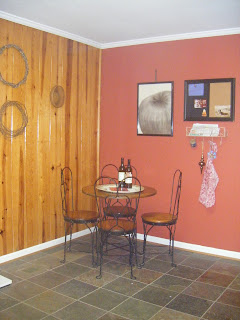 We’ll have to run a phone line under the house unless we drill through the wall to get to the one in the bedroom on the other side of the wall, but I think this unused space is much better suited for a desk. I’m going to call the phone company and see if they’ll come run the line for free. If so, I’m sending that ice cream parlor set back to my mom’s and moving my computer ASAP.