There is just something about the smell of real butter simmering in the pan that makes me go all weak in the knees. It reminds me of the way the streets in France smelled. We must have passed a thousand boulangeries and patisseries while we were there, and I’m pretty sure we went into most of them as well. I love to cook and I especially love to cook with real butter. Because I try to be health conscious, I usually save it for nights when I’m really cooking. (I have heard that real butter is better for you than margarine though…)

Tonight, I decided to roast a chicken for dinner. I got this very simple and very tasty recipe here. I usually truss the chicken, but decided it was too much work this time around. I’m pleased to say that the chicken still turned out as tender and juicy as it always does, event without trussing it first. However, it does look much prettier if you do decide to truss it. 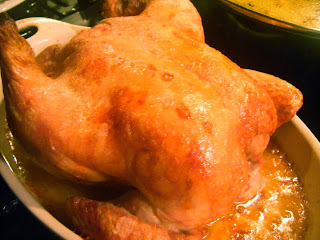 Preheat the oven to 450°F.
Rinse the chicken and dry it very well with paper towels, inside and out. (The less it steams, the drier the heat, the better.) *Note: Sometimes they leave “stuff” inside the chicken. I take these unwanted parts out. and throw them away.
Truss the bird, if you prefer.
Put the chicken on a roasting pan or dish and sprinkle salt all over the chicken. This will create a nice crispy skin while roasting and I’m sure it helps hold the moisture in as well.
Wait for the over to reach 450° before you put the chicken in.
Once you put it in the oven, leave it alone for 50 – 60 minutes or until the internal temp reaches 180°. (Don’t baste it, don’t put butter on it, don’t do anything… just let the oven work its magic.)
After its finished cooking, let it rest 15 minutes before cutting into servings.

This recipe is so easy and such a crowd pleaser! The chicken cost between $3 – $4 and is so much tastier than a rotisserie chicken you purchase at the deli.

As a side dish, I cut up some yellow squash and threw it in the pan with a couple of pats of real butter. This is the easiest a tastiest vegetable dish that I like to make. I covered the pan and let it cook until the squash started to turn a golden brown around the edges, then I flipped it over. Season with salt and pepper. 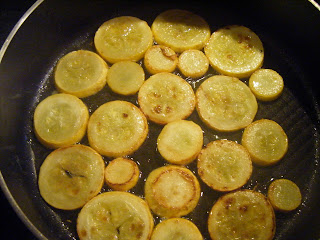 My whole house smells like a gourmet restaurant and the look on Patrick’s face after he finished his meal was more than gratifying. I can go to bed feeling like I actually did something.

*Side note: I have the very best mother-in-law who cleaned my disaster of a kitchen and Alston’s room today. Had she not done this, I probably wouldn’t have had the energy to cook after cleaning the kitchen and we probably would have eaten fishsticks. Again.

Leave a Reply to The Buchanan Family Cancel reply