This year, we decided to have a very small birthday party, as compared to last year’s big bash. I sent out 11 invitations, rented a bounce, made cupcakes, and ordered pizza. It was supposed to be very laid-back and low-key… I must say, the day could have gone a little better. While Alston was playing on his new tricycle,he was stung by a yellow jacket on the palm of the hand. Add the fact that he’d been sick all week and didn’t get a good nap and you get a two-year old in total melt-down. As you can imagine, this put quite a damper on the mood. We tried to distract him with cupcakes and presents, but he would burst into tears every 10 minutes or so. I managed to get a few pictures and catch some of the birthday action on film. Please excuse my camera work: at times I forgot I was filming. I edited out some footage of the ground, but this short little clip pretty much sums up the party. All in all, the kiddies enjoyed playing in the bounce, coloring with sidewalk chalk, opening presents and playing in the tent that Alston got from Poppa Joe & Kelli. 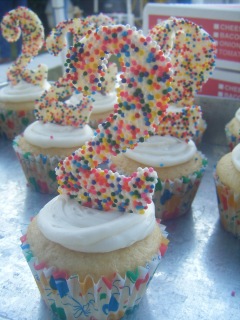 Other minor-disasters that occurred during the day:

Its all pretty funny looking back on it, but I’ve just now had the time to sit down and reflect on how funny it actually was. Alston has fully recovered from the sting and the sickness; I don’t think he will suffer any long-term emotional scarring.