{MONDAY}
So, after ready Ashley’s post about sitting Ava Reese in her Bumbo to play, I decided to try it with Alston. Unfortunately, I’m afraid he’s going to be a bit obsessed with himself {much like his daddy}, because his favorite toy is his mirror.

{TUESDAY}
After the camera battery incident, I made sure to take my camera to bed with me that night. This is the sweet angel that I get to wake up to every morning. He makes me a morning person.

After we played in the bed for a while, I decided to put Alston in the shower with me. We sat in the bottom of the shower and let the water run on us. Alston loved it. I haven’t put him in the shower with me since he was itty bitty and Patrick stood with his head in the curtain to make sure he didn’t slip out of my arms. Now that he can hold his head up pretty good, he’s a lot easier to deal with in the shower. You can see how much he loves any activity–as long as he’s naked. 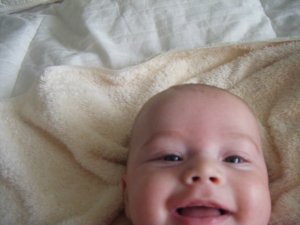 Later that evening, my mom and Keith came over to visit while we watched American Idol. I decided to let Alston try some cereal mixed with banana baby food and milk. {He doesn’t seem to like the milk and cereal alone, and I completely understand why–yuck.} He seemed to like it pretty well, but he was a little tired and not really willing to cooperate. Tomorrow morning we’re going to try again, when he’s not so fussy. 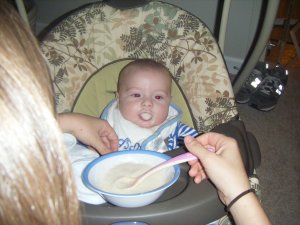 {WEDNESDAY}
My mom had to start back on her shift on Wednesday night, so when she called to invite me to the local library to hear and Irish violinist, {confused} I agreed. We planned on going to hear the music and then go to lunch. When we got there, my mom corrected herself, he was an Irish fiddler. We arrived early to get seats because we knew we would be the only people younger than 60 and didn’t want Alston’s stroller to be in the way. I parked us in the center of the back aisle, conveniently located next to a door {i.e. escape route}. My mom’s friend Karen, who’s idea it had been to go, joined us. Alston smiled and gooed and was the happy, pleasant baby he always is–until the fiddler commenced to fiddling. **SIDE NOTE: Every mom learns to understand the different types of cries their baby has: hungry, sleepy, hurt, fussy and (Alston’s newest) scared.** The music started out kind of slow and sad, like the soundtrack to a movie about the potato famine. Alston started making faces, his bottom lip started to turn out a little and I thought he was just sleepy. So I tried to “bounce and pat” which usually does the trick, but to no avail. As the music turned a little more up tempo, Alston let out a cry I have never heard before. It was a mix between scared and hurt. He was just plain upset. I got up and left the room, somewhat embarrassed. This situation had never happened to me before- he’s usually so happy. I took him to the bathroom and laid him on the changing table and he just smiled. It was a little cooler in the restroom so I figured he had just gotten hot. I attempted to take him back to listen. Nope. Not gonna happen. He immediately started to frown and poke his lip out, so I turned right back around and went to the children’s section where it the music wasn’t as easily heard. He was just fine. I’m guessing that he really didn’t like the Irish fiddler one bit. I can’t say I blame him, it was a bit–well, Irishy.

Later that night, we went to church at Church of The Highlands, where the praise and worship is comparable to a rock concert. Alston was just fine. I snapped a blurry pic before Patrick scolded me about taking pictures in church.